A maple research guide, in partnership between the University of Vermont and AgNIC

The genus Acer (the maple family) is believed to have originated in China during the Cretaceous (120 million years before the present) and spread westward to Asia Minor, the Balkans and Europe; southward into Indonesia and the Philippines; and northeast into Korea, Japan and eastern Siberia, where it crossed into North America (where it spread from Alaska to the east coast and all the way south to Guatemala). The greatest abundance of maple trees, according to the fossil record, was during the Miocene (25 to 5 million years before the present). Subsequent periods of glaciation isolated pockets of the genus and helped to give rise to the various species; over 180 species of maple have been identified as fossils. The Maple Society currently recognizes 124 species of maples, 78 subspecies and 8 varieties.

The maple family thrives best in cool, moist climates, and thirteen of these maple species are native to the United States and Canada, extending from Ontario, Quebec, New Brunswick and Nova Scotia through New England, the Midwest, New York, Pennsylvania and the Middle Atlantic states. They grow well in areas with full sun to partial shade, and require deep, thorough irrigation and a ready moisture supply in the root zone.

Maples are susceptible to a number of pests, including the Asian Longhorned Beetle, leafhoppers, scales, gall makers, borers and aphids, as well as diseases including sooty mold fungi, cankers, powdery mildew, and galls. Maples are also at risk for a number of environmental disorders, including damaging ice storms, mineral deficiencies, nutrient and mineral excesses, poor water management and sunburn. 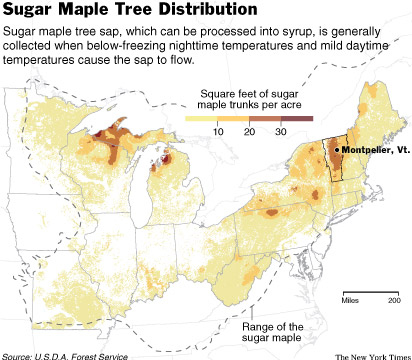 AskMaple is a reference service provided by the University of Vermont Libraries, in collaboration with maple syrup researchers, educators, producers, and historians. Please contact us with your questions about anything maple!