In the above example, if you were to search in an image database for all images to which the search tag “spot” (case insensitve) had been assigned, how many results would you have obtained?

If you answered three, you would be right!

Of these three, how many would actually include Spot (the dog) in the image?

Again the answer is three! That is because somebody manually evaluated the image, noticed that Spot was included in the image, and deliberately assigned the search tag “spot” to it.

Bibliographic databases that utilize a thesaurus, such as MEDLINE, CINAHL, and PsycINFO, work in basically the same way. That is, when you search on subject terms from the thesaurus, all the results that come up will have had that term deliberately assigned to them because somebody decided that they are specifically on that topic.

To understand the benefit of searching by subject headings, consider the term cancer (the disease). From the following list, which terms are roughly synonymous with cancer?

If you answered “All of the above”, you would be right again!

When the creators of MEDLINE were developing their thesaurus, they had to decide which one of these terms they would use to represent the concept of cancer. After much debate, they finally decided that they would use the term Neoplasms. From that point forward, all articles in the database that were on the topic of cancer were assigned the MeSH heading of Neoplasms, whether or not the term "neoplasms" was actually found anywhere in the database record.

The result is that you do not have to search on each of the synonyms for cancer separately because the system will do it for you. And the flip side of this is that the system will not bring up articles that are not on cancer (the disease) even though the term may occur incidentally within the database record.

Bottom line: in databases that use a thesaurus, searching with subject headings can be much more efficient and thorough than searching by keyword. Subject headings are your friend. Use them whenever possible!

So now let's take a look at a contrasting situation. In the above example, if you were conducting a keyword search in an image database on the word "spot", which of the above images would have come up?

If you answered all three you would be right! That's because all three contained the word "spot" somewhere within the database record. However, clearly two of the items have nothing to do with Jill's dog Spot.

Bibliographic databases work more or less the same way, in that a keyword search will bring up all records that contain a given term anywhere within the database record. Sometimes the article will actually be "about" that term, but other times - as in the 2 examples above - the article will have nothing to do with that topic, even though that word occurs within the database record.

As discussed in the previous section, many scholarly databases such as MEDLINE, CINAHL, and PsycINFO assign subject headings from its thesaurus to each of its articles as a way of helping the searcher find articles. However, if a given topic is not covered by a thesaurus term, then a keyword search is the only alternative.

Topics for which keyword searches may be indicated include:

Keyword searches characteristically bring up larger numbers of results than subject heading searches. However, they also tend to bring up more articles that are "irrelevant" (i.e., off-topic) because they cannot differentiate between an accidental use of a term and when an article is actually about that topic.

In databases without a thesaurus, keyword searching is the only option.

"Boolean operators" are the connector words that are used to combine sets of search results to achieve certain desired effects. They are named for George Boole, a 19th century English mathematician. The most commonly used Boolean operators are AND, OR, and NOT.

Here is a handy "rule of thumb" for the Boolean operators AND and OR: 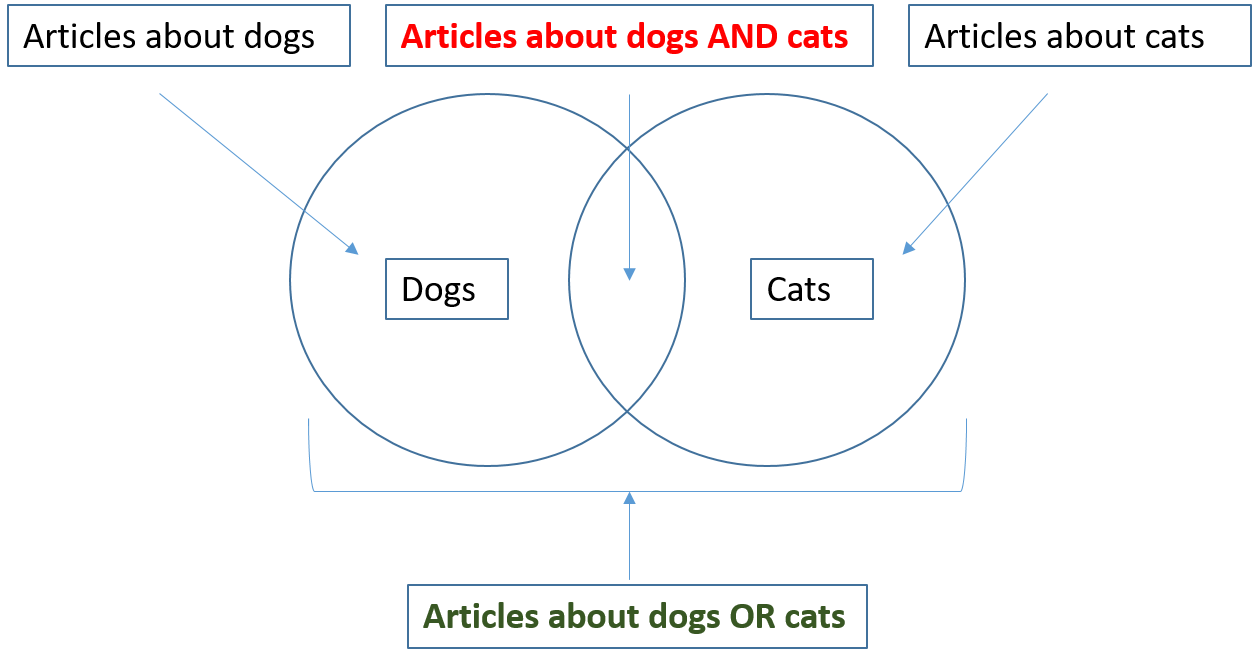 For more information about Boolean operators, check out these resources:

Well, this can be a problem indeed! Here are some tactics to try:

This can be as much of a problem as getting too few results. Try one of these strategies to simultaneously reduce the numbers of hits, and focus the results:

This provides detailed information about Subject Heading and Keyword searches, Limits, Explode, and much more.