A guide to finding and using information published by the three branches of the U.S. government.

What Do You Want to Find? -- Research Pathways

A Known Item (you have the title, author, or SuDoc call number) 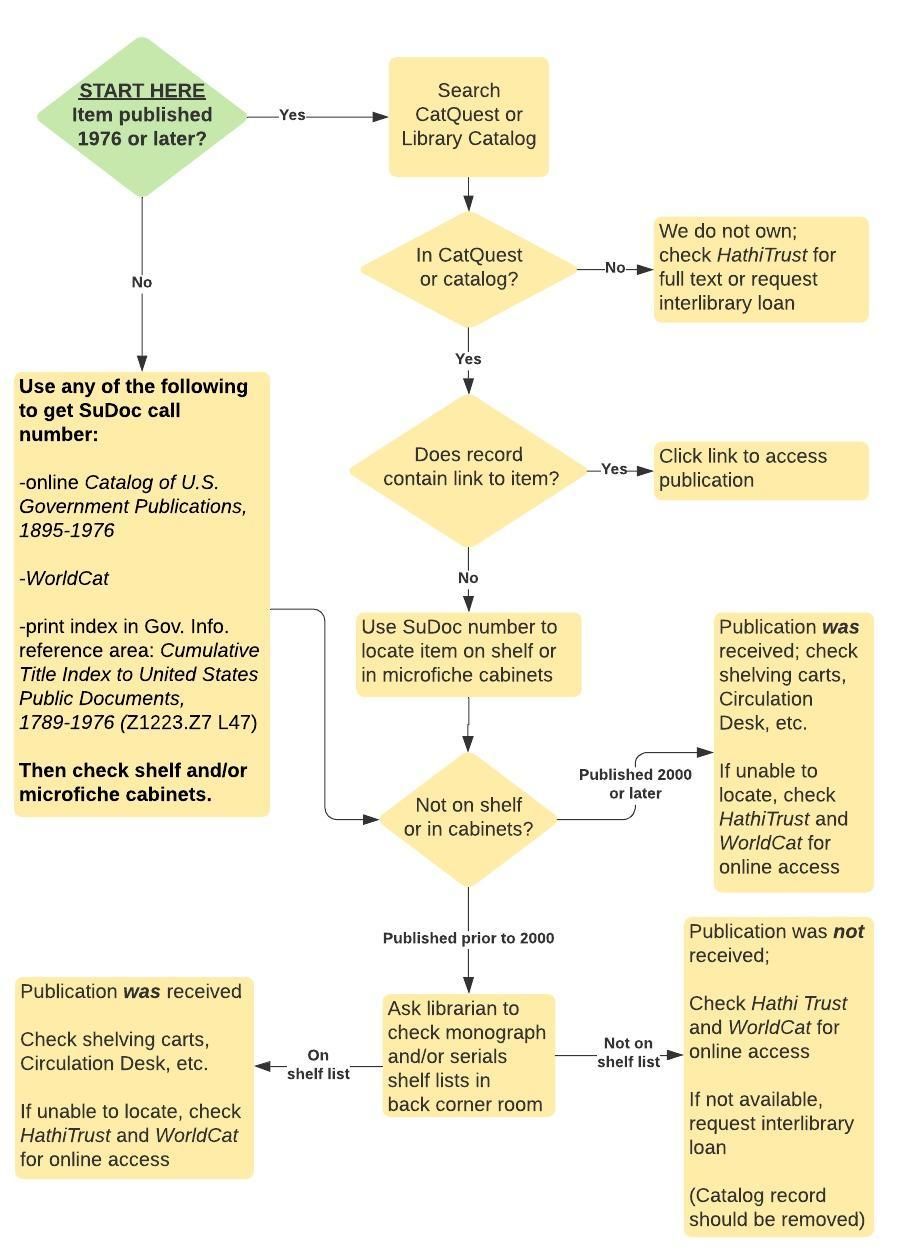 U.S. Government Information on a Topic

NOTE: After you have identified titles of interest using the options below, locate the full text by following the instructions above for finding a known item.

OPTION 2: TO IDENTIFY INFORMATION PUBLISHED BEFORE 1976

Legislative History of a Bill or Law

Links to the online resources listed in the flowchart:
ProQuest Congressional
Congress.gov 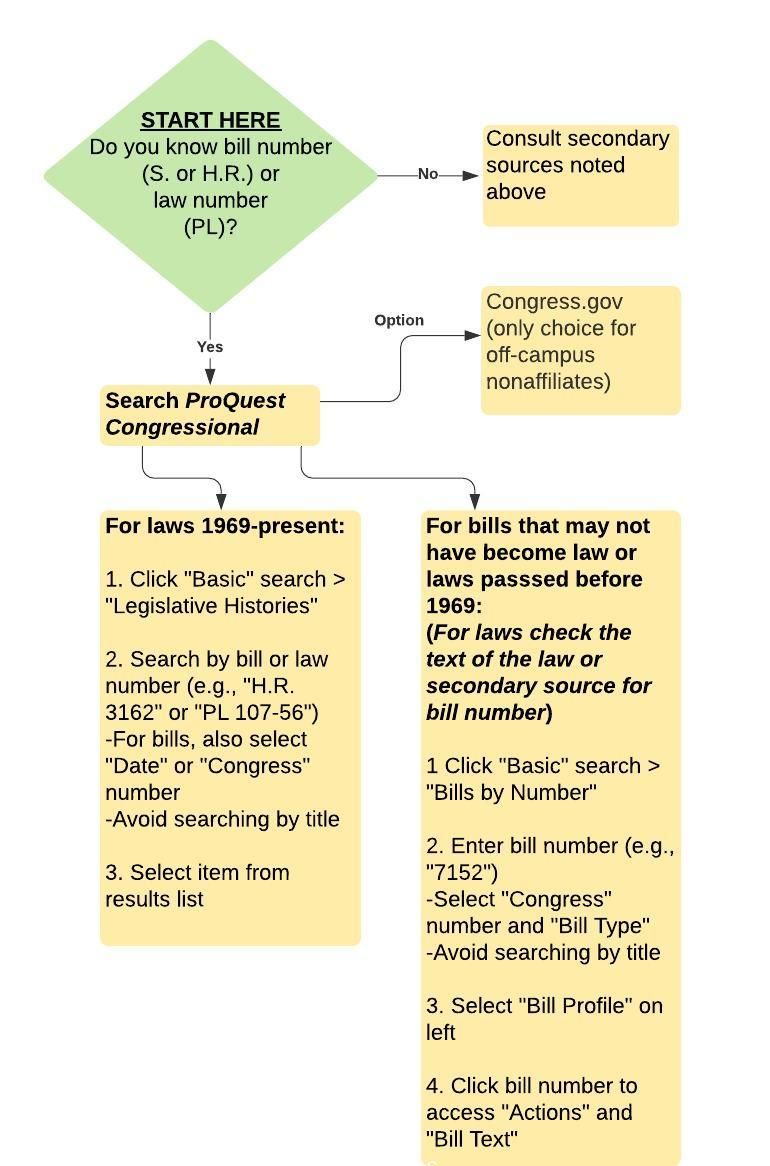 STEP 1: GET SUDOC NUMBER FOR HEARING

STEP 1: USE SECONDARY SOURCES TO IDENTIFY DATE(S) OF DEBATE AND CHAMBER (House or Senate)

CQ Almanac
ProQuest Congressional Search in the "Legislative Histories" section on the left.

STEP 2: LOOK UNDER APPROPRIATE DATE(S) IN:

IMPORTANT! It may be helpful to consult secondary sources first to get numbers for reports, especially CQ Almanac (annual) and CQ Magazine (for current legislation). 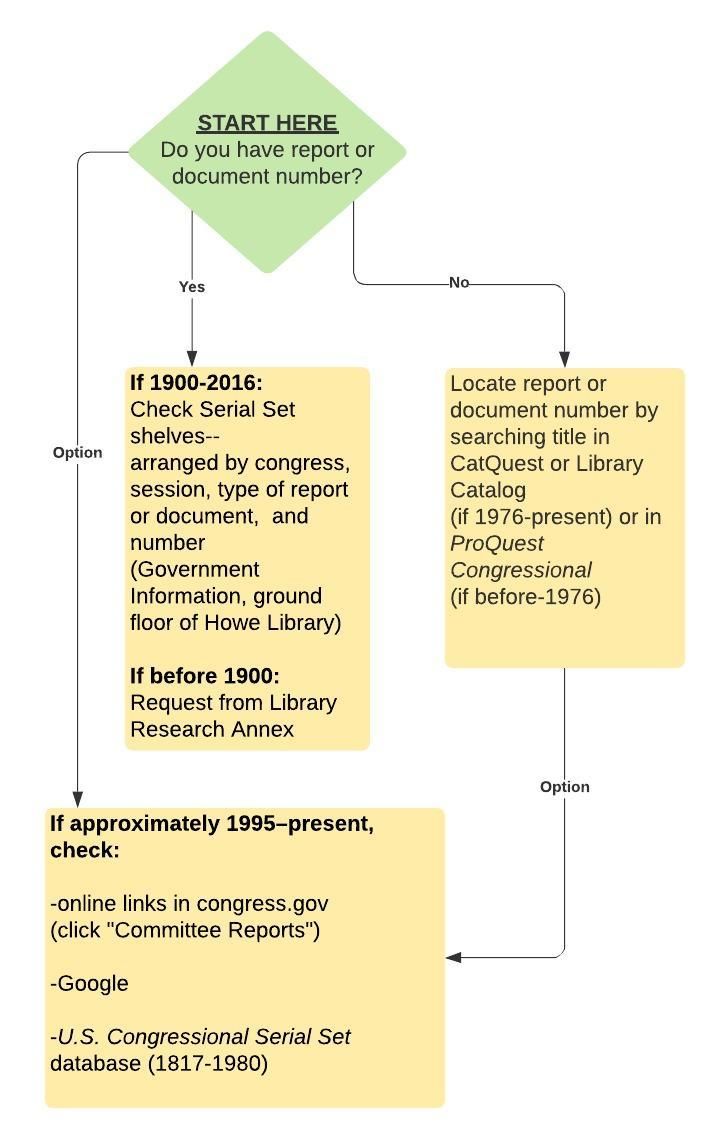 Laws and Regulations Currently in Force

CONSULT BOTH OF THE FOLLOWING to get laws passed by the legislative branch AND regulations established by the executive branch:

United States Code
The codification of the general and permanent laws of the United States, divided into 53 titles (broad subject areas). The U.S. Code does not include regulations issued by executive branch agencies (see Code of Federal Regulations below for these), treaties, or laws enacted by state or local governments. (The United States Code Annotated contains annotations and is available on Westlaw and Nexis Uni.)

Code of Federal Regulations
The codification of the general and permanent rules published in the Federal Register by the departments and agencies of the Federal Government.

"CENSUS" DEFINED: An official, periodic enumeration of a population.

These three sources contain data from the Census Bureau and may have what you need:

ProQuest Statistical Abstract of the United States
A subscription e-book containing thousands of data tables from a variety of sources.

CensusScope
An easy-to-use tool for investigating U.S. demographic trends, maintained by the Social Science Data Analysis Network (SSDAN) at the University of Michigan.

NEXT, CONSULT THIS SOURCE:

TO DIVE DEEPER, CONSULT THESE SOURCES:

data.census.gov
A Census Bureau portal providing access to data from Decennial Census of Population and Housing (conducted every 10 years), American Community Survey (conducted on an ongoing basis), Economic Census, and Census of Governments, dating back to 2000. This replaced American FactFinder.

Census of Agriculture
Enumerates U.S. farms and ranches and the people who operate them, including small plots of land, whether rural or urban; conducted every five years in years ending in "2" and "7."

Census of Governments
Covers all state and local governments in the United States; conducted every five years in years ending in "2" and "7."

Economic Census
Enumerates data about businesses and employees; conducted every five years in years ending in "2" and "7."

A subscription e-book containing thousands of data tables from a variety of sources. Once you've located a relevant table, check the source notes at the bottom for leads to additional data.


FOR HISTORICAL DATA, CONSULT:
Previous editions of Statistical Abstract of the United States

Use the index in the back of the book to locate relevant tables. (Note that the numbers in the index are table numbers, NOT page numbers.) Once you've located a relevant table, check the source notes at the bottom for leads to additional data.

Historical Statistics of the United States: Colonial Times to 1970.
Includes more than 12,500 time series, mostly annual, providing a statistical history of U.S. social, economic, political, and geographic development during periods from 1610 to 1970.


FOR RECENT DATA, CONSULT:
Data and Statistics about the U.S.
This U.S. government website provides links to U.S. Census data and to a host of federal agency programs that collect, analyze, and disseminate statistical data.

Foreign Relations of the United States
The series presents the official documentary historical record of major U.S. foreign policy decisions and significant diplomatic activity. You can search within the volumes, or browse volume titles by administration from Abraham Lincoln through William Clinton. Online access provided by the Department of State, Office of the Historian.

Print volumes covering the years 1864-1984 are shelved in Government Information on the ground floor of the Howe Library, aisle 91.

CONSULT THE SOURCES BELOW

IMPORTANT! It's helpful to begin by searching secondary legal sources such as articles, books, and websites for citations to court cases before consulting the primary sources listed below. A citation to a decision usually includes four elements. For example-- 467 U.S. 837 (1984)--"467" indicates the volume of the publication in which the case is reported, "U.S." is the abbreviation for the publication in which it was reported (in this example, United States Reports), "837" indicates the initial page number of the case, and "1984" indicates the year the case was decided.

Code of Federal Regulations
Consult Title 3, The President, to find recent material. This is the first publication in which presidential documents appear, before they are published in Public Papers of the Presidents of the United States (see below).

Public Papers of the Presidents of the United States
Includes such documents as speeches, bill signings and vetoes, executive orders, proclamations, messages to Congress, and more.

Print volumes of the series are available in Government Information, ground floor of the Howe Library, aisle 58.

Codification of Presidential Proclamations and Executive Orders
An editorial codification providing in one convenient reference source proclamations and executive orders with general applicability and continuing effect. This codification covers the period April 13, 1945, through January 20, 1989. Not intended to be used as a definitive legal authority. Prepared by the National Archives and Records Administration.